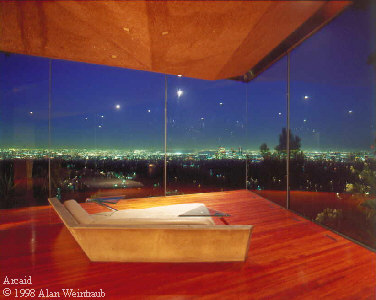 . Lautner built Chemosphere -- a four-bedroom house shaped like an hexagonal flying saucer perched high atop a single hollow concrete column. He also designed the Carling House whose living room pivots on a turntable to transform itself into an outdoor patio overlooking the lights of the city.

with bold geometry and exciting use of materials. The Sheats House has dynamic triangular roof lines and walls of glass that place no barrier between the shelter within and the outside world at your feet. The sensuously curving cast concrete Arango House is surrounded and embraced by a pool than flows through it and then flows out to and over the edge of the structure to reflect the serene and unobstructed beauty of the blue sky and waters of Acapulco Bay.

. Despite their originality and drama, my overwhelming impression of each one has always been, "But, of course!" Lautner once said he had to have "eight to ten good reasons to do anything." Nothing is accidental nor arbitrary. Every single item, from the foundation to the faucet is planned, and sensible, and inevitable.

He designs to suit the site, the climate, and his client's needs and desires. He built a motel that steadfastly stands up to the brutal winds of the desert, a heat-conserving solar home in Alaska, and a ground-hugging, snow-insulated ski home in Colorado. He suspended a multi-story structure from two interlocking cast concrete sine waves to create a comfortable, private, airy, 5-bedroom ocean-view home on a long and narrow Malibu lot.

Lautner buildings are wonders of engineering.

When clients come to him with an impossible, "unbuildable" site, like Chemosphere's narrow 45-degree sloping lot, he can devise the new structural principles and elements required to built on it. He can also invent new building methods. He attached the steel girders supporting Chemosphere to the central concrete column with epoxy -- in 1960!

because John Lautner has integrity. In a career that has spanned over fifty years, Lautner has never deviated from his principles nor allowed fashion or cliche or anything other than the logic and beauty of a his own vision to be built.

It was not easy.

studying with Frank Lloyd Wright and two decades of building extraordinary structures -- he was still known as "John Lautner, Designer." Since he had never graduated from a school of architecture, the AIA would not grant him the title of "Architect."

In the late 1940's when Lautner's enormously successful "Googie's Coffee Shop" became the model for soaring-ceiling, glass-front coffee shops all over America, he began to face the darkest time of his career.

Architectural critics in leading magazines sneered at and ridiculed him, "Googie Architecture" became a joke, and Lautner's career seemed over. Lautner had only his own courage and dedication to see him through the 1950's and 1960's. There were years when the only work he had was a kitchen remodel and years when he didn't even have that.

His lean years did not end until the late 1970's when Lautner built Bob Hope's spectacular home in Palm Springs. At last, he finally begin to receive the honor and recognition he had so long deserved.

John Lautner is now in his eighties and still practicing architecture in his bustling Los Angeles office. His buildings have been featured on "The Outer Limits" TV show, in the movies "Moonraker" and "Lethal Weapon 2," in photo spreads in Architectural Digest and in Playboy.

They are now the subject of a wonderful new book. It is called simply

John Lautner, Architect and is a large, handsome, 288-page volume lavishly illustrated with hundreds of photographs (160 in color) of Lautner's incredible structures. There are interviews with Lautner, the story of each building, blueprints, and a time-line with bibliography. It is edited by Frank Escher and published by Artemis in London, England. At $95, it is a bargain.

If you have ever wondered where the Howard Roarks of the world are or longed for a real-life hero, if you want to feel the exaltation of admiration, then look up to the buildings of John Lautner.

I have received letters expressing interest in

John Lautner and concern for the way such a great man has been ignored and persecuted by the architectural profession.

Although he had an heroic struggle and many dry years, John Lautner ultimately triumphed and won recognition within his own lifetime. Most important, he maintained his own integrity and could look back with pride and amusement on the time when, "I just kept a week ahead of the rent for 35 years."

Lautner didn't seem to give much thought to his critics because he was so focused on building. When my husband and I visited Lautner's tiny, shabby office in 1970 to discuss a house for us, he was wearing patched clothing. He hadn't worked for a long time, yet he was filled with energy and exuberance. Whatever he may have suffered definitely "only went down to a certain point."

As we drove up to our proposed site in the Hollywood Hills, my husband pointed out a few houses on the way which we liked. "I did that one," Lautner replied every time with deep pride.

With or without recognition and existential success, he was a happy man -- a perfect example of what Ayn Rand meant when she said (in the Romantic Manifesto) that "he who fights for the future lives in it today."

Lautner did get occasional recognition -- even in the beginning. After studying with Frank Lloyd Wright, he came to Los Angeles in 1937 to supervise the construction of two of Wright's projects. Two years later he established his own practice in L.A. and built a house for himself and his family. Architectural critic Henry Russell Hitchcock called

Lautner's own home "the best house by an architect under 30 in the United States." Later Hitchcock was to declare that, "Lautner's work could stand comparison with that of his master." In 1961 the Encyclopaedia Brittanica rated Lautner's Chemosphere "the most modern home built in the world."

His own profession, the AIA and the critics, who at first referred to him as "John Lautner, Designer" and withheld the title "architect," eventually recognized him, too. In 1970 Lautner was made Fellow of the American Institute of Architects for Excellence of Design, and was given many other awards as well. In 1993 he received the Gold Medal from the Los Angeles AIA Chapter for his lifetime of achievement.

By the 1980's and 1990's Lautner was an internationally known and respected architect. His work has been the subject of numerous exhibitions in the United States and abroad.

Lautner buildings have been the sets of movies like "Diamonds are Forever" and "Body Double," and have been featured in countless publications around the world as well as in a documentary film.

When Artemis London published the magnificent book John Lautner, Architect last month, Hennesey and Ingalls Book Store devoted their entire front window display to pictures of Lautner and his buildings. Lautner himself was there to meet his admirers and autograph copies of the book.

Ultimately Lautner got the thing he wanted most -- the opportunity to build his way. As of last week, Lautner was working on several large residential projects in his bustling, prosperous office.

Yesterday, October 27, 1994, there was an article about John Lautner in The Los Angeles Times praising him and his 55-year career of uncompromising excellence. I was not happy to see it. John Lautner died on Monday at the age of 83. He is survived by his wife, four children, six grandchildren, and four great-grandchildren -- as well as by over a hundred buildings which will serve as his monument and as his testament to what a man can achieve on Earth.

"The purpose of Architecture is to improve human life. Create timeless, free, joyous spaces for all activities in life. The infinite variety of these spaces can be as varied as life itself and they must be as sensible as nature in deriving from a main idea and flowering into a beautiful entity." -- John Lautner

For more information, see the